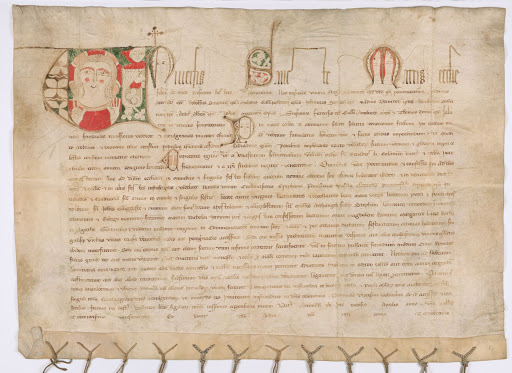 The city of Bonn recently came into possession of a letter of indulgence from 1329 found in Nijmegen, issued for the Vilich monastery. Dr. Yvonne Leiverkus, deputy city archivist of Bonn, came across another indulgence letter from the same year during her research on it, which had previously been unnoticed in the archives.

She reported about these documents and the indulgence system in the Middle Ages in a StroofKOLLEG. The event in front of more than 70 guests took place due to renovation work in the Mayor Stroof House at Castle Lede, whose owners had kindly offered this as an alternative. Contrary to what had been announced, the Nijmwegen letter could not be shown in the original at the Kolleg for reasons of conservation.

However, the club received the above repro photograph; click for large view. Explanation. Interested parties who would like to view the documents in the original can do so by prior arrangement at the Bonn City Archives - or view a true-to-scale copy in the Bürgermeister-Stroof-Haus.