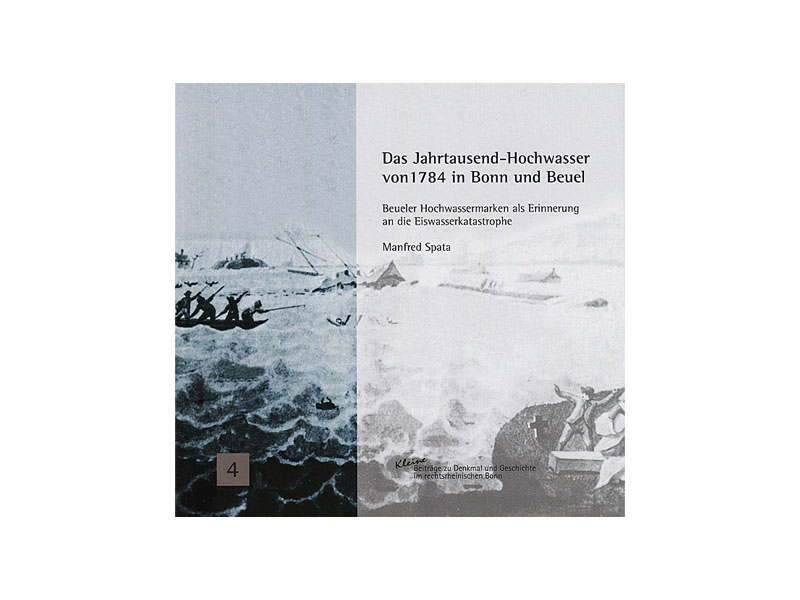 In 1784 Beuel was hit by a catastrophic ice flood. The Beuel geodesist and historiographer Manfred Spata went on the trail of this tragedy and recorded his findings in a concise form, but with rich illustrations in a book published by the Denkmal- und Geschichtsverein.

The association presented this until the end of February 2018 at a special exhibition with further exhibits on this millennium flood. As a permanent reminder, the association placed flood marks at prominent locations.

To the report in the General-Anzeiger Bonn

In January 1784 the Rhine between Bonn and Beuel is frozen over, so that it can be crossed by man and vehicle.

This is captured in the picture by the electoral court painter Francois Rousseau (or his son Jakob). In the centre of the picture the double church of Schwarzrheindorf from the southwest.

With the thaw that follows, the millennium floods overtake the region. 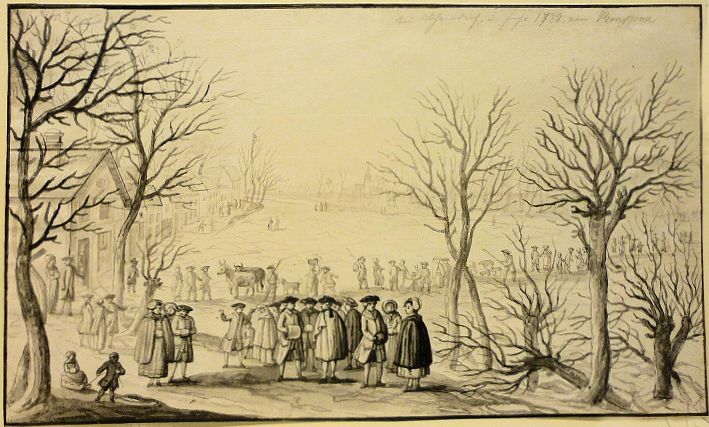 In February 1784, the ice of the previously frozen Rhine breaks open between Bonn and Beuel, and with a mighty flood of unprecedented magnitude, the heavy ice floes smash the half-timbered houses of the villages from Beuel to Gensem.

This is captured in the picture by the electoral court painter Francois Rousseau (or his son Jakob). On the right in the background the Limperich Finkenberg. 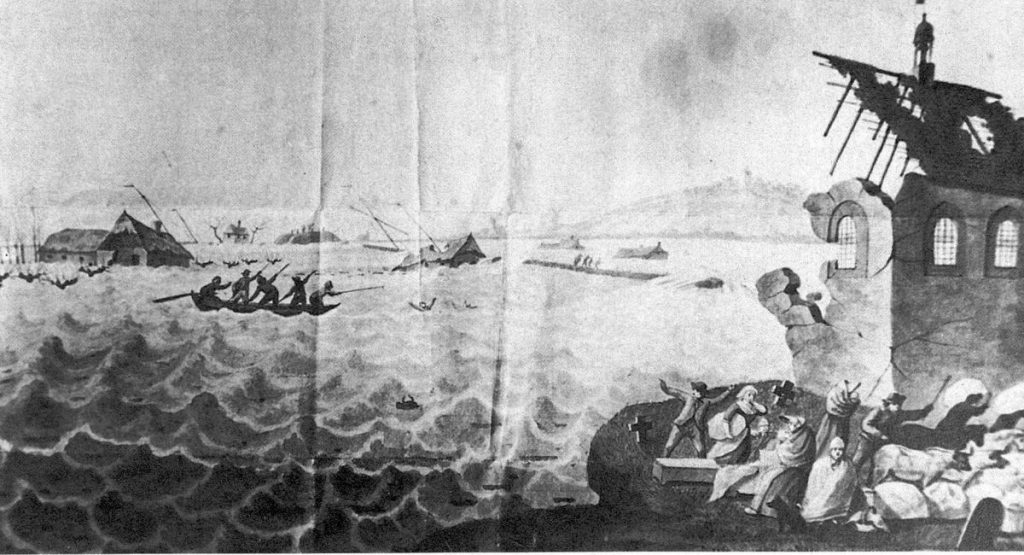 Around the turn of the year 1783/84, there had been an unusually severe winter throughout Europe. In January 1784 the Rhine was frozen over, in places even to the bottom, so that it could be crossed by man and carriage without any problems. Thus there was also a lively transit traffic between Bonn and Beuel, which Rousseau captured in a picture, the double church in the background (see illustration). Even festivities were celebrated on the ice, in which even the Elector of Cologne took part. This hustle and bustle lasted for weeks.

With the eventual thaw, however, came a massive flood at the same time; known as the highest of all time to this day. That is why it is called the "millennium flood". Of course, as every year, all the villages near the river from Dollendorf to the mouth of the Sieg, including the low-lying districts of Geislar and Limperich, were flooded. This time, however, the water was so high that the houses disappeared completely; no one had been able to reach safety on the roof ridge, for example. It reached at least up to the height of today's Beuel railway station and just before today's cemetery on Platanenweg. Even the cloister of Bonn Cathedral was flooded.

But the catastrophe only became complete when the water pressure finally - it was February 25, 1784 - also broke open the ice barrier and tore loose huge blocks of ice. Together with the powerful force of the water, they crushed everything in their path. No half-timbered house could withstand them. And the vineyards and orchards were also swept away and even large poplars and beeches were radically uprooted. Finally, all the villages near the Rhine were razed to the ground; only a few stone houses, including Mehlem's house in Beuel, were able to withstand. As a result, the economic basis of the people was also destroyed: from the following years, famines are handed down.

The memory of this tragedy, of course, deeply engraved in the collective memory of the local population. No one who has not also heard about it from his ancestors. In these traditions, however, one piece of information is completely missing: that the disaster here on the Rhine was part of a worldwide environmental catastrophe. The people of that time had simply not heard about it. For example, because of volcanic eruptions on Iceland, the entire island had to be evacuated, and in Italy alone 25,000 people had lost their lives.

These global backgrounds have not been published in Bonn even until today. Only now has the Beuel geodesist and historiographer Manfred Spata investigated them. He has recorded his findings in a concise form, but with rich illustrations, in a book published by the Denkmal- und Geschichtsverein:"The millennium flood of 1784 in Bonn and Beuel". In it also all original contemporary witness reports from our area are printed. The narrow book is to be had in the mayor Stroof house at the price of 5, - EUR and can be ordered with the association also by telephone (call 0228 / 422 14 664).