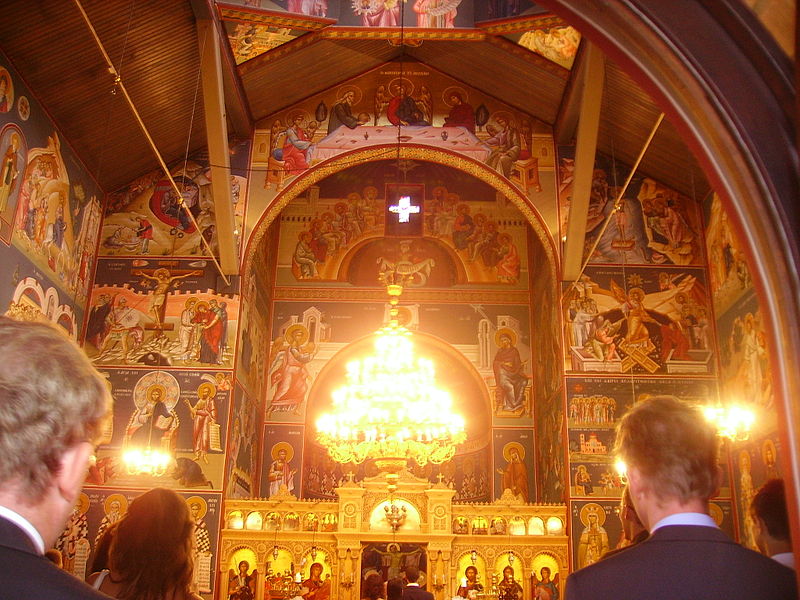 "History after work" is the name of the series of events organised by the Denkmal- und Geschichtsverein Bonn-Rrh. which regularly invites visitors on the first Tuesday of the month to encounter monuments in Beuel. On the April date, about a hundred visitors came to the Greek Orthodox Metropolitan Church Agias Trias (Greek for Holy Trinity) in Limperich to marvel at the ornate décor of the church and to listen to the explanations of Archpriest Sokratis Ntallis about the history of the building, but also about the religious background.

In 1974, the construction of the church, which is also the bishop's seat of Germany and Central Europe, was started under the direction of the architect Klaus Hönig and consecrated three years later.

The central building, which follows the shape of a Greek cross in plan, is built of ochre-toned brick. The dome was typically given the shape of a regular octagon, an octagon.

From the beginning, the sacred furnishings included the iconostasis, a partition wall between the altar and the worshippers' area, richly carved from lime wood and decorated with images. In Greek Orthodox churches, the second image from the left always indicates the patronage of the church; the Trinity was therefore depicted here. At the beginning, the walls were still pure white; only much later was the painting of the church to be completed. The Greek artist Christophanis Voutsinas, the priest explained, began the icon paintings with the help of his daughter in 1979 and completed them 23 years later. He first created them on canvases, which were then fixed to the plaster. This method was chosen because under the local climatic conditions, where extremely dry periods alternate with humid ones, it would have been feared that paintings applied directly to the walls would have peeled off. Thus, not only impressive depictions of saints and motifs from the Old and New Testaments were created on an area of around 600 square metres. The two Bonn city patrons Cassius and Florentius are also represented. Carl J. Bachem, chairman of the association, expressed the hope that one day the third city patron saint, St. Adelheid von Vilich, would also be included.

The fact that the guests could sit on chairs in the church was by no means a matter of course, explained Father Ntallis. In the Greek Orthodox Church, the faithful prayed standing, in remembrance of the sufferings of Jesus Christ; at most, the row of chairs along the church walls was intended for old and sick people.

The convivial conclusion of the event took place in the restaurant "Haus am Rhein".

Claudia Knöfel, Member of the Executive Board